Showing posts with the label Autobiography
Show All 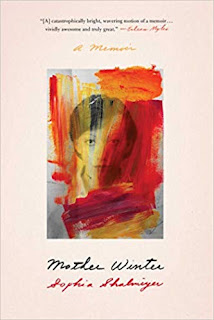 
An arresting memoir equal parts refugee-coming-of-age story, feminist manifesto, and meditation on motherhood, displacement, gender politics, and art that follows award-winning writer Sophia Shalmiyev's flight from the Soviet Union, where she was forced to abandon her estranged mother, and her subsequent quest to find her.

Russian sentences begin backward, Sophia Shalmiyev tells us on the first page of her striking, lyrical memoir, Mother Winter. To understand the end of her story we must go back to her beginning.
Born to a Russian mother and an Azerbaijani father, Shalmiyev was raised in the stark oppressiveness of 1980s Leningrad (now St. Petersburg). An imbalance of power and the prevalence of antisemitism in her homeland led her father to steal Shalmiyev away, emigrating to America, abandoning her estranged mother, Elena. At age eleven, Shalmiyev found herself on a plane headed west, motherless and terrified of the new world unfolding before her.

Now a mother herself, in Mother Winter Shalmiyev depicts in urgent vignettes her emotional journeys as an immigrant, an artist, and a woman raised without her mother. She tells of her early days in St. Petersburg, a land unkind to women, wayward or otherwise; her tumultuous pit-stop in Italy as a refugee on her way to America; the life she built for herself in the Pacific Northwest, raising two children of her own; and ultimately, her cathartic voyage back to Russia as an adult, where she searched endlessly for the alcoholic mother she never knew. Braided into her physical journey is a metaphorical exploration of the many surrogate mothers Shalmiyev sought out in place of her own--whether in books, art, lovers, or other lost souls banded together by their misfortunes.

Mother Winter is the story of Shalmiyev's years of travel, searching, and forging meaningful connection with the worlds she occupies--the result is a searing observation of the human heart and psyche's many shades across time and culture. As critically acclaimed author Michelle Tea says, "with sparse, poetic language Shalmiyev builds a personal history that is fractured and raw; a brilliant, lovely ache."


Mother Winter is award-winning writer Sophia Shalmiyev's autobiographical account of her challenging childhood and her need to find somewhere she belonged. The description of leaving Russia with her father to fly to the US in search of a better life reminded me very much of Maria Sharapova's memoir as the situation where her mother stayed behind in Russia with Shalmiyev having to grow up without her is identical to what happened in Sharapova's early life. I couldn't imagine growing up without a mother figure, and the authors search for a surrogate is moving, in fact, the whole book is profound and poignant.

But it isn't only autobiographical it also explores serious and timely topical issues with sincerity, and this makes it a powerful, hard-hitting read; It's a lyrical, beautiful and altogether emotive experience. There is rumination over motherhood, feminism, loss, grief, sexuality, gender politics, history, self-identity, displacement, refugees, art and culture, and that's just for starters. However, at its heart, all of this feeds into the key subject - coming-of-age in a strange country without a mother. But make no mistake this is a heartbreaking story where you feel the authors pain, rage, sadness, not least due to the abuse she suffered.

The format in which it is written is indeed unconventional; we not only have the story arc, but there are sporadic inclusions of poetry and vignettes too. Some may find the way it is written disjointed but I'm a fan of unusual formats and structure, so it works well for me.

Many thanks to Simon & Schuster for an ARC.