Showing posts with the label A Beautiful Corpse
Show All 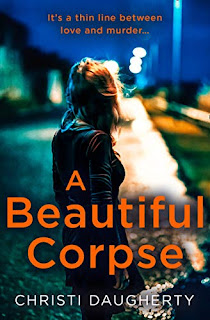 A murder that shocks a city…
Shots ring out on one of Savannah's most famous streets. A beautiful law student lies dead.

A case full of secrets and lies…
Three men close to the victim are questioned. All of them claim to love her. All of them say they are innocent of her murder.

An investigation that could prove deadly…
As crime reporter Harper McClain unravels a tangled story of obsession and jealousy, the killer focuses on her. He's already killed one woman. Will he kill another?


A Beautiful Corpse is the second novel in Harper McClain crime reporter series set in hot and humid Savannah, Georgia, and I already have a feeling that this is going to be added to my list of most engaging, exciting series of which I should never miss an instalment. This is crime fiction at its most entertaining, and Daugherty's characters are easy to support and invest in, especially feisty Harper. After flying through the first couple of pages I knew it was going to be a night of no sleep as I wanted to find out what happened to the victim; I was more than happy to dedicate those hours to reading rather than sleeping. The writing flows beautifully from page to page making devouring it in a single sitting the only viable option.

This fast, pacy crime tale can be read as a standalone without any problem, but I advise not missing out on the first novel even if you decide to pick it up after this. Cleverly written with a well thought out plot, this is a damn good read. It is a little predictable in places, but I still thoroughly enjoyed it. The descriptions of the simmering Georgian heat were enough to make me fall in love back here in the chilly United Kingdom. If you prefer your crime to be credible and believable then this is a good choice; the author packs the book with authenticity and you can tell that her previous job as a crime reporter has informed her work. I look forward to getting my mitts on the third instalment.

Many thanks to HarperCollins for an ARC.