Showing posts from August, 2019
Show All

Dry River: A uniquely menacing and gripping thriller by John Steele
My rating: 4 of 5 stars

Dry River is the third novel in the Jackie Shaw action thriller series, and this is the best instalment to date. As soon as I picked it up it had me in its clutches right through the excitement and tension-filled story. It's well written, fast-paced and so action-packed you are never given a moment to breathe. I found the subject matter of the Yakuza gang absolutely fascinating, and I always think that the use of real villains who exist and actually do the things they do throughout the book make it completely unputdownable.

The Japanese mafia is ruthless both in real life and in this work of fiction where they kidnap and torment Jackie's holiday companions as they enjoyed some rest and relaxation and also murdered a man. Jackie knows hunting them is flirting with death itself and so begins a dangerous game of cat and mouse and an intense, addictive race against time to find his friends. I feel I should mention the rather vividly described scenes of gore and death; it's definitely not for the faint-hearted.

As a Japanophile, the setting very much appealed to me and the depiction of the different places Jackie visits reminded me exactly why I love the country. It's really a rather unnerving and disturbing read and the changing points of view add even more tension and nervous excitement to the mix. With a cast of superb characters, a well-written narrative and more twists and turns than you can shake a stick at, this comes highly recommended. Many thanks to Sarah for an ARC.

The Regret by Dan Malakin
My rating: 4 of 5 stars

What a fantastic read this was! I mean what more could you ask for? There's the stellar cast, a beautifully plotted story and fascinating insight into the daily life of those who have been stalked or scammed and the knock-on effect this can have on their lives for the foreseeable future. Not only this but it packed a real emotional punch too. Right from the beginning, you are drawn into a tale it is easy to immerse yourself in and losing a couple of hours between the pages was very enjoyable. I particularly loved the short, snappy chapters as it makes it so much simpler to read a couple more and then keep on reading even though you know you should sleep. There are multiple threads establishing themselves throughout but they were so seamlessly interlinked and it was a doddle to keep it all aligned in my head.

The sensitivity and true compassion the author shows in relation to topics such as stalking, anorexia and online fraud through his words felt as though they came from someone who really understood these subjects and the complexity of them inside and out. I could relate to Rachel and felt for her quite strongly as she was dealing with such a lot. It's well written in a way that will appeal to many readers and is a captivating, harrowing and evocative read for sure. There were twists and turns aplenty and the conclusion was a surprise but also added to the visceral punch. All in all, The Regret is an excellent debut thriller, and Malakin focuses on more realistic nightmare-inducers more of us may be able to connect and empathise with. Highly recommended. Many thanks to Bloodhound Books for an ARC.

The Grave Digger's Boy by R.R. Newman
My rating: 4 of 5 stars

The Grave Digger's Boy is an intelligently written and well-plotted crime thriller and a solid debut novel from newcomer R. R. Newman, and whilst I enjoyed it and thought it was emotionally engaging and intriguing enough to continue with, I must admit to guessing the murderer quite early on. On the other hand, what I particularly loved, though, was that the narrative was very fluid and the story easy to immerse yourself in right from the opening pages.

It begins relatively slowly but for good reason, as it sets out all of the ins and outs of the tale but soon the twists and turns come at you thick and fast. The attention to detail with regards to the cast was superb; each of the characters literally leapt off the pages and came alive with their relatability and three-dimensionality. Overall, this was a compelling and entertaining way to spend a few afternoon hours. 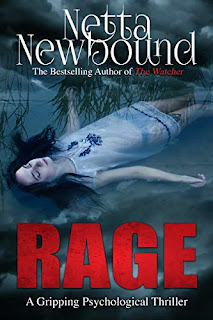 Rage by Netta Newbound
My rating: 4 of 5 stars

Nurse, Lizzi Yates, is assigned to provide end-of-life care to Charlie Maidley, one of Britain's footballing legends, on the condition she keeps his identity a secret.

Unbeknownst to Lizzi, Charlie’s doctors have agreed to allow his sister, Miriam, to take him home to die on the strict understanding he remains in an induced coma, due to his history of assaulting women—a side effect of his brain tumour.

Miriam goes away on business, leaving Lizzi in charge, but a mishap with Charlie's medication has Lizzi questioning why he is spending his final days comatose. Deciding he is being sedated without just cause, she makes the call to wake him up. However, a string of events and the discovery of a girl's body at the bottom of the garden lead her to wonder if she’s made the right decision.

Who is the killer?

Could Lizzi be his next victim?

Don’t miss RAGE by bestselling author Netta Newbound - A gripping psychological thriller that will keep you turning pages long into the night.

Rage by bestselling author Netta Newbound is an intense, nail-biting psychological thriller; I admit that I had no idea what to expect as the writer was new to me, so I was pleasantly surprised. It revolves around a pretty unique premise. When Lizzi Yates is called in to nurse renowned footballing superstar Charlie Maidley through palliative care she has no idea how complicated agreeing to care for him effectively incognito is about to bring. He is allowed to go home to die, the place most of us would choose to pass, however, Lizzi disagrees with the doctor's adamance that he must remain comatose due to his history of assaulting women as a result of his brain tumour. She, therefore, decides to let the sedatives wear off and allow him to be fully conscious again. But was she right to do so or does she now have blood on her hands?

This turned to be such an original and well-constructed twist-fest and turning the pages was a pleasure and not a chore. I've been having a little bit of a hard time focusing on books and reviews of late due to poor health, but this has reignited my passion for tense fiction. Hooking you in from the very beginning, not only are you taken on a thrilling ride with the characters but also an emotional one too. The book draws attention to the timely and relevant issues of the social care crisis/end-of-life care and reminded me that doctors have far too much power over the lives of those they don't even know. Rage is a thriller that snakes its way along delivering surprises right and left and a whole heap of mystery thrown in for good measure. Highly recommended. Many thanks to Sarah Hardy for an ARC. 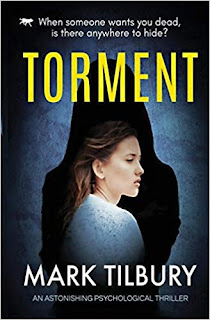 Torment by Mark Tilbury
My rating: 4 of 5 stars

When someone wants you dead, is there anywhere to hide?

Who can you really trust?

Beth couldn’t be happier. She is eight weeks pregnant and married to the man of her dreams. But after returning home from a celebratory meal, she finds a wreath from her sister’s grave hanging above the bed and a kitchen knife embedded in her pillow. There are no signs of a forced entry. Nothing is stolen. And no one other than the cleaner has a key to the house.
Then a campaign of terror begins. Beth becomes increasingly paranoid as it becomes clear that someone close to the family is behind these disturbing events.

But who would want Beth dead?

Does the past hold the clue?

And can Beth find the answer before it’s too late?

Torment is a story of misplaced loyalty, revenge and sacrifice.


Mark Tilbury is the bestselling author of multiple thrillers including You Belong to Me, The Liar's Promise and The Abattoir of Dreams. Torment is a dark and compelling psychological thriller which will appeal to fans of authors like Mark Edwards, Charle Gallagher and John Nicholl.

Another day, another dollar, and another Tilbury thriller that gives the reader way more than they ever bargained for! This is one author who has absolutely no problem pulling the wool over your eyes and fooling even the most seasoned crime connoisseurs multiple times within the short span of a single novel. It explores the insidious nature of jealousy, hatred and wanting what you simply can't have in life and is scarily realistic and within the realms of possibility. Remember: Evil comes in all shapes and sizes, and our antagonist is a devious and thoroughly delusional individual.

The story follows Beth and her husband, David, who have gone through a hellish time in terms of 3 miscarriages, and now she is with baby once again. They are naturally terrified that history will repeat itself once more but there is also a more pressing development to deal with. Disturbing things keep happening; someone has been letting themselves in to Beth and David's home and carrying out threatening tasks. With no-one and nothing quite as it seems we wonder who exactly is behind these barbaric and cruel actions. Soon the campaign of terror eclipses Beth's seemingly perfect life and triggers a domino effect. Once the first domino has fallen is there any hope of escaping the devastation to come?

Torment is packed full of Tilbury's trademark surprises, twists and red herrings, and we are taken on a truly gripping rollercoaster ride which never quite plateau's or even's out; this is fantastic because by keeping you off-kilter it turns into a wholly unpredictable yarn. I was always tense waiting for a new threat to emerge. Tilbury is truly adept at completely rattling his readers and shocking them to their core, and this delivers all you could want and more. It's an addictive, absorbing and compulsively readable domestic thriller. Highly recommended. Many thanks to Bloodhound Books for an ARC.