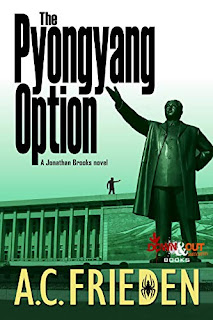 New Orleans attorney Jonathan Brooks is desperate to rebuild his law firm after Hurricane Katrina. Short on clients, he takes the only work he can find: a murky business deal in Ukraine.

But after he lands in Kyiv, his client’s executive vanishes. Suspecting foul play, Jonathan enlists the help of a U.S. diplomat. But the next day they are brutally ambushed. Injured and racing against the clock, Jonathan embarks on a frantic search for clues through the back alleys of Kyiv to an abandoned town near Chernobyl.

Meanwhile, Jonathan’s ex-wife Linda, a journalist, lands in North Korea to report on historic nuclear disarmament talks. She begins probing local officials, not realizing that she and Jonathan are both on a collision course with a deadly web of hackers, spies and assassins.

To uncover the truth and save them both, Jonathan may have only one option: to go to Pyongyang with as much leverage as possible and try to make it out alive.


Jonathan Brooks is back for another dangerous and unpredictable adventure in the third book in the series. Each book reads perfectly well as a standalone as the story is self-contained but you will not be privy to the evolution of the recurring characters. That said, after reading The Pyongyang Option I will be heading back to enjoy the previous two; it's impossible not to. I found I was immediately drawn in and engaged by the plot which is well written, fast paced and packed full of action from start to finish.

Although Jonathan is a lawyer first and foremost he certainly reminded me of James Bond - globetrotting and visiting various interesting countries. I have a fascination with North Korea, probably due to the secrecy surrounding it and the unwillingness to accept most visitors. Mr Frieden is one of the lucky few to have travelled and stayed within the country and that translates into vivid, authentic descriptions. The details of the other exotic locations featured in the book are equally realistic and mesmerising. I really loved the travelling aspect of it as it again had tones of Mr Bond's intrepid missions.

If I'm honest I didn't want it to end; it's so eminently readable. The characters are believable, the plot well thought out and there are plenty of twists in the tale. Frieden creates a tension that is palpable and an ominous atmosphere which runs for the duration. This is a masterfully crafted international thriller which is complex, multi-layered and impossible to put down; I read it in a single, nailbiting sitting.

It's obvious that extensive research has informed the story making it more grounded than most spy thrillers tend to be. His experiences without a doubt added a rare authenticity to proceedings. If you enjoy James Bond, thrillers with a dose of espionage and a dash of political intrigue and/or riveting, page-turning entertainment then you'll likely appreciate The Pyongyang Option. It certainly deserves more attention than it's currently receiving. I eagerly anticipate the fourth instalment.


View all my reviews